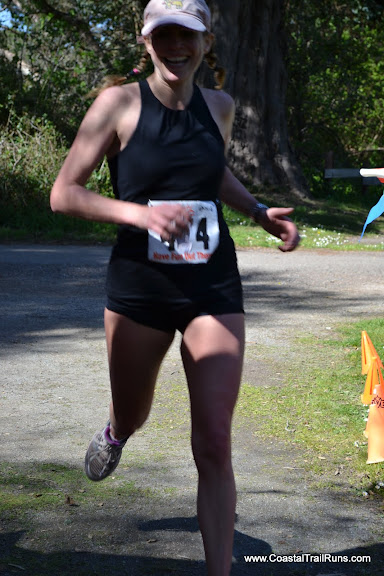 Traditionally I start Costal Trail events with some mishap. At Crystal Springs I squirted Icy Heat gel into my eye while investigating how to open the tube moments before the race began. At Montara I lost my hanky.

A minor thing for most people, this is a disaster for me as (bizarrely) I only have half a functional nose and it streams as soon as I start running. No hanky means no breathing.  I was auditioning various items in the car to be replacements …tissues are useless as they become saturated with sweat…a diaper was a serious contender…then I  found  the hanky lying under my car..I mean how on earth did it get there?? with two minutes to go.

So starting the race with hanky was quite a relief.  The pre-race tension melted away as the half marathon, marathon and 50k runners kicked off at 8am and soon plunged into beautiful dark comforting forest. It is worth pushing yourself towards the front of the herd at the start so you don’t get trapped behind slower runners on the single track uphill. For many of us it is always a fine balance between fighting to get breathing under control and staying in a good position – good to know you can afford to go for it on this one as while it is a long hill the first mile or so is relatively comfortable.  (I missed the start at Steep Ravine a month ago (I was chatting duh) and sprinted to get to the head of the pack to be free on single track near that start. Not a good idea, I was still sucking in air like a hyperactive vaccum cleaner 5 miles later.)

The course (http://www.coastaltrailruns.com/mm_montara_mountain.html is a series of hills forming a half marathon course.  A big hill, a teeny one and then a medium one. Marathoners repeat them all, 50K runners do the same and then hit the medium one again. This really is the kind of run where you can help yourself by being strategic when you deploy your energy gels. At least with a repeating course you can learn from your mistakes. (Here I learned to fuel up for that third hill as I  fizzled out on it during the first loop).

The first and big hill one is like a friendly giant. It is a long hill but divides into clear sections which give you a wonderful sense of achievement and anticipation as you gradually rise to North Peak. The top section is glorious. An open expanse of fire road slashed in rock, much of it is gleaming white in the sun  – almost like a glacier. The views are stunning and you get to soak them in while you are running, even if you are not the kind of runner who likes to stop. I found it rather sweet that we got to pick up an orange rubber band on the first visit to the top and a purple on the second. (Note on this, like most people I put them on my wrist initially which for me was a mistake. My wrists are not particularly big but my hands do tend to swell towards the end of a marathon and I was startled to realise I had given myself a huge throbbing hand an hour later. So I moved them to a finger which was fine and then ..a  fun option for ladies …to the end of my braids).

Flying back down from North Peak (above) is tremendous fun.  For serious competitors it’s a chance to see how hard you have to work to catch the leaders and to eyeball how fresh the meat is creeping up behind you. But that really isn’t the style of these events overall.  There is always good banter when runners get to pass each other and it is important to stress just what a lovely mix of people join in at these events. Everyone benefits from being encouraged by each other. The sense of competition is just right, enough of a race for the lead people to be pushed but the type of event where first timers or people who intend to hike parts feel in good company. Everyone has their own challenge and everyone is respected for being there and achieving their own goals.

The lower section of the descent from North Peak is a blast – you hurtle around gloriously pungent Eucalyptus trees in a fast series of switchbacks. At the bottom you have an odd little portion on flat ground (it is hard to adjust after being downhill for so long), there is time for a tantalizing glimpse of your getaway car in the parking area and the finishing line before you pass the refreshments table and head up the smallest of the three hills. As runners pass this station on every loop and are visible for a decent length of time it makes the event more interesting than some for supporters. Small children will find it fun to sneak the candy, energy bites and gels!

Jason Wolf and I finished as first man and lady a little over 4 hours  – and are the current course record holders ( have to stress  we were rather lucky with the conditions, it was a perfect day  – I can imagine the course would take a great deal longer with extremes of wind, rain or heat)

On a repeating course I like to name things and pick features to revisit as little mental goals along the way. I named the first hill the Gentle Giant, the second The Pimple and the third The Zit. The second is not a big deal, up up up, down down down, you can cope with that. The third, charmingly named Hazelnut is hideous. Absolutely hideous. I suppose by that stage your legs are tired so it is unfair to blame the hill entirely but I will anyway. The gradient is more difficult to get comfy on, there is an endless series of similar looking evil switchbacks which lure you into thinking you have reached the top over and over again. I started naming the switchbacks ‘Git’ , ‘Frog leg’, ‘Rat Face’ etc  towards the end and searching for distinguishing signs to entertain myself. Then, oh joy, it is all suddenly over and you can relax into bouncing along a delightful downhill, interrupted only by a stunning excursion through a grove of Eucalyptus trees. On your final loop this downhill makes for a joyous finish.

If you are thinking about doing this race do it. I would push you to consider the half marathon rather than the 10K which doesn’t have the nicest bits of course. Forgive the Zit and form a memory to cherish zooming down North Peak. I gave Wendell a big kick on the shin for making me run up The Zit twice, it made me feel much better. You might like to try this too.

No hazelnuts were hurt in the making of this blog, though a few may be slightly offended.

This entry was posted on Friday, March 30th, 2012 at 6:35 pm and tagged with Marathon, Montara, Trail and posted in Marathons. You can follow any responses to this entry through the RSS 2.0 feed.
Oakland Marathon 25th March 2012 »

One response to “Montara Marathon, March 2012”